Congratulations to Tom and Duke for a Happy New Year’s Day reunion!

Special thanks to Team K9 Jake for all their hard work.

On New Year’s Eve around three in the afternoon, Duke escaped from a fenced yard in Odenton. A half-hour later, cars were pulling over on Route 32 and calling the police with reports of a dog running along the wood line on the opposite side of the highway where he escaped. His owner Tom got into three different police cruisers as they attempted to coral and locate him.

On New Year’s Day Team K9 Jake searched several areas including those of the sightings near Route 32.

Tim and the pet owner were figuring out an area to drop scent trails and feeding stations. They spotted an electrician who was doing service work around the business park and spoke to him about Duke. They texted the electrician a picture of a preliminary flier they created. They asked him to contact the owner or DFD if he spotted the dog.

While doing a little more checking of areas, Duke’s owner received a phone call. It was the electrician DFD had spoken to. He had spotted Duke near where Jake was tracking. He opened the warehouse and put Duke inside. Tom drove back over to get his dog!

Needless to say, DFD had a huge part in this by talking to the electrician and letting him know about Duke. Also, Tom laying down his scent in the area by simply walking along during the track helped Duke recognize something familiar and remain in that safe zone. 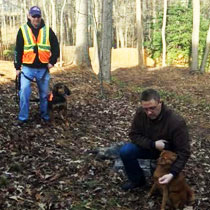