We would like to welcome Rex the Doberman home after a five day adventure in the woods. Rex jumped the fence on Thursday and had been seen in a neighborhood nearby. On Monday K9 Lee and handler Janel met with Rex’s owner and went to the area where Rex was running around. Thanks to several sightings by the locals, an exact location of where he was last seen was identified.  Once we had that information, K9 Lee was able to pick up Rex’s scent right away. Lee powered down the road, hot on the scent. He showed us a backyard where Rex had been, and as K9 Lee, Janel and the owner came around the house there was Rex about 30 feet away. standing in a clearing!  At that point we confirmed that it was indeed Rex in the area, and a plan was formed to catch him.  Surprisingly, while walking back to the car, Rex ran out in front of us! The next day the owner spotted him and was able to approach him. Luckily, Rex was caught and was able to even make his vet appointment that was scheduled before he escaped. Relieved that Rex is home again! 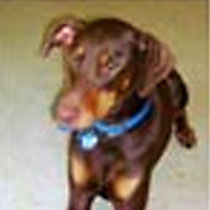