I was partially responsible for watching my friends’ dog while they were out of the country. Shortly after they adopted her, their dog ran away from them.  And then, she did it again. This time, she ran into a dangerous park in Baltimore City and disappeared. We spotted her once but that was all.. Dogs Finding Dogs was called out for the second time to find her. Once again she was found hiding under a deck. It was just in time! Her owners were returning home the very next day. With the exception of the woods, she went the same route as the first time, but just wound up under a different deck. 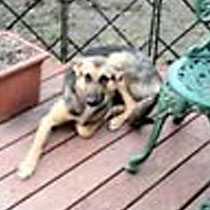