Congratulations to Sarah and Ronnie for a safe and fast return home!

Special thanks to K9 Jake for finding him under the gazebo.

Ronnie slipped out of the front door December 23rd.

K9 Jake scented up on a cat hammock and immediately moved to the house next door.

He checked under a deck and a small opening under a gazebo. K9 Jake got on his belly and stuck his whole snout in the opening. That looked like a strong enough signal. Sarah mentioned that they had already looked there.

Tim and K9 Jake checked the neighbors yards to be doubly sure Ronnie wasn’t hiding there. K9 Jake kept going back to the gazebo and was digging with his paws to get under it.

With a flashlight, Sarah saw Ronnie underneath the gazebo. Still in flight mode, he was not ready to come out with all those people and a crazy coonhound in the area! Sarah sat outside the gazebo with sardines & cat food and Ronnie was coaxed out a few hours later. 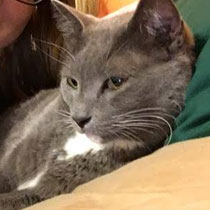