Sonu, a beautiful and much loved brown tabby and best friend, went missing all of a sudden. It was unusual for him because he is an avid hunter, always bringing home his prizes to his owners. Sonu would catch mice, baby bats and a whole list of other critters. He was very well adapted to being outside. Being gone almost a week was not at all like him. Heidi was brought out to look for Sonu. She was scented up from Sonu’s favorite cat door. Immediately Sonu’s scent went from the door to around the house and to a neighbor’s house that was under construction. During the track Heidi was frantically air scenting extremely hard, tracking with her nose to the ground at a fierce pace! This meant that something strange was up. We could smell a hint of something not right but ignored it. Then Heidi pulled us to the edge of the road where it was wooded. It became very apparent that we needed to see what was there. So sadly Sonu was found, deceased. It was absolutely heart breaking. He was just two houses away and headed back home. What took Sonu we will never know. This is the hardest part of our job. Sometimes the ending is not what we want, but at least we can provide closure. Our thoughts go out to Sonu and his family. 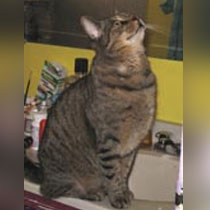