The story of this little lost kitty began in late February. The couple was relocating from Florida to Maryland. After two days of travel with two cats, they arrived and got a room at the Days Inn, where they would be staying for a few days until their house was ready. Their overly-curious, precocious, female cat escaped. They searched the area around the hotel that night with no luck, but they did receive information from a hotel worker that he had seen her in the area a couple of hours after she went missing.

This distraught cat owner was not going to give up. She did everything that she could think of: placed an ad on Craigslist, put up flyers, hired Dogs Finding Dogs, and set a trap in various “hot-spot” locations. One day, she returned to the place where she had set up the trap, only to find that someone had stolen her trap. She left a can of tuna with one of her socks, just in case her cat was still in the area. The reason she left her sock was because one of her cat’s odd little habits was that she liked to carry her owners’ socks around the house.

Imagine her surprise when she returned the next day to find most of the tuna gone and the sock was missing! Naturally, she assumed that something else had taken the sock. Not one to give up, the owner purchased another trap and set it up in another location not too far away. Her perseverance paid off.  Four days later, she found her little wanderer in the trap! But the most amazing part of the story was that the missing sock was in the trap also! She can only assume that the kitty was walking around with the sock in her mouth for those last days of her adventure. What a special feline!!! 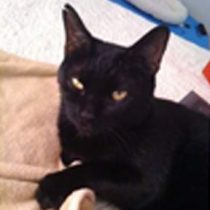