Spooky got his name because he is a very scared kitty. He got out of the house and ran into a woodpile in the back yard. We tried to catch him ourselves but had no luck because he ran off. Anne called us from a posting on the SPCA website. She brought Heidi out to look for Spooky. Heidi led us to a shed in the neighbor’s yard and was insistent that Spooky was under it. We could not see him because not all of the ground was visible and of course Spooky is black. Heidi went back to the shed three times and just stood there looking at us as to say “Here he is, you crazy humans!”  We baited up the back yard with tuna fish trails that led to the house hoping that this would bring him out. Spooky finally appeared, but it took three tries to catch him in one night. He kept coming to the back door and we’d open it, and then he would run back to the shed!  Finally, the humans got smart and we ambushed him on his fourth attempt! Heidi let us know where Spooky was and also took the fear away that he was no where around. Thank you! 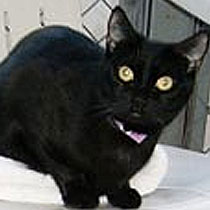