Congratulations to Angie, William and Sprinkles for a safe return home after being stolen!

Special Thanks goes to Felicia and her K9 for a terrific job in finding the house and person who stole Sprinkles, and for the support of the police in retrieving her.

Here is the story from Angie:

Sprinkles got out of our yard at about 6:20 PM on Tuesday, January 24th. We realized she escaped within about 10 minutes and immediately began searching for her. There were about 7 of us looking for her and we saw no trace of her anywhere.

We started again the next morning with the same results. As we searched my husband saw some men outside the house 2 doors down and approached them to ask if they’d seen Sprinkles. One of them said, “Oh yeah, we saw that dog last night. She was under our car. We tried to grab her but she took off running. Then we walked around for a few minutes trying to figure out who she belonged to but we couldn’t see anyone.”

As soon as I heard the story though I was suspicious because I knew there was no way they could have been walking around looking for someone who had lost a dog and not crossed our path while we were walking around yelling for Sprinkles. Sprinkles never runs from anyone. If someone is trying to pet her or talks to her she crouches down and starts sprinkling everywhere in excitement. The whole thing just didn’t add up. (My mom says it was ‘mother’s intuition’ that helped me to know these were the guys we were looking for even though it took a few days for us to put it all together. )

We continued searching the whole neighborhood for 3 days thinking that she must have just run. Then a friend suggested we call dogs finding dogs. I figured it couldn’t hurt and my worst fear was that Sprinkles was out in the woods freezing to death somewhere.

The handler & tracker they sent out to our house were wonderful. Felicia, the handler, brought her dog, Riley, who is trained & certified just like police dogs, out on Saturday, January 28th. Riley was able to pick up Sprinkles’ scent right away. She followed Sprinkles’ path from the walk she had taken after school on Tuesday with our son and then immediately back toward our house. Riley then went straight to the empty house nearby and stopped on the front porch. This was the only house Riley went near while tracking. Riley continued to pace back and forth on the porch looking in the windows, insistent that this was where the scent trail lead. This confirmed our suspicion that Sprinkles was not lost or missing. She was stolen!!! We strongly believed that someone who was working on the house took her. We filed a police report and then we waited.

Since our suspicions had been confirmed by Riley we began to do extensive research into these guys while we waited for the police. With the help of a friend we found out the workers names. My super sleuth friend and I used numerous websites and found their addresses and eventually the owner of the building where the one guy lived.

Another friend of mine who lived near his address drove by on her way to work to see if maybe they would have the dog outside. She saw a little boy walking another dog and asked him if he had seen a dog looking like Sprinkles and the boy told her he had seen a tiny dog like that yesterday. So I decided to call the building owner this morning (February 2nd) and ask for his help.

I told the owner the story of how we thought our dog ended up in his building and it turns out that he had just taken the same guy to court to evict him because he hadn’t been paying rent. He was more than happy to help us. He called his building manager, who called the landlord and asked if they had seen a small yorkie in the building. The landlord confirmed that she had indeed seen a small yorkie that had just shown up in the past few days.

Now that we knew for sure this guy had taken our dog, Will and his friend from work drove to his address determined to get Sprinkles back. Several police friends called in favors and asked for support so that a police officer would be able to go to the house with Will in case there was any trouble.

While they were traveling, I got a phone call from the lady living in the same apartment building. She told me that she had searched Craig’s list and found my ‘Lost Dog’ listing. She also agreed to help us. She watched the doors to make sure no one left the building before the police arrived. She unlocked the main entrance to the building and she assured me that Sprinkles was healthy and would be fine.

Finally the police arrived, Will and his coworker covered the back door of the building while the officer took a picture of Sprinkles to the man’s door and knocked. The worker wasn’t home. His girlfriend, however, was there and answered the door with Sprinkles in her arms. The cop said that’s a stolen dog and the owners have been searching for her everywhere. The girlfriend told the cop she “found” Sprinkles in Urbana. The cop basically told her that was B.S. and she gave Sprinkles to him.

Thank you so much to everyone who helped us to make it through this crazy ordeal and everyone who helped us with our search whether it was by physically walking around looking with us, texting and calling to check in, giving us ideas of how to search, saying prayers, or even just keeping us in your thoughts. Thanks you to Felicia & Riley from Fogs Finding Dogs for putting us on the right track that eventually led us to Sprinkles! We will be forever grateful to each and every one of you! 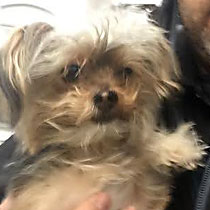