Walker was one of a litter of six pups that came to us while passing through on their way to Ontario. We were asked if we would mind taking care of the 8 week old pups until transportation could be arranged for them to make it across the border. A couple of days before leaving our house, we were told that if we wanted, we could keep one of the pups as only four were expected in Canada and five would be seen as a bonus anyway. The decision as to which pup to keep was not in our hands. Walker chose us. Every time I would walk by the kitchen where we were keeping the pups, Walker would come running over, little tail wagging, stand on his hind legs wanting to be picked up as if he was saying “I’ll be yours if you just get me outta here!” The other pups just kept wrestling and tumbling around in a ball of fur across the kitchen floor. This was in September 2006.

Over the next three years we watched as Walker grew to become an extremely handsome Walker Hound. All during this time going through the trials and tribulations of raising a pup and slowly watching our furniture disappear before our eyes. The boy discovered that sofa and chair cushions were made of foam and that foam could be trimmed, once exposed, into little tiny bite size pieces and spread all over the house. We won’t even talk about the foam carpet underlayment that also disappeared during his formative years. What amazed us the most is that our two senior citizen Labrador Retrievers just sat and watched as everything unfolded and proudly gave us the look of “You can’t blame us…We had nothing to do with that!” Walker also loved to wrestle. I would push him back about three to four feet and he would stop with his front legs and paws in the air on his hind haunches as if in suspended animation only to come pouncing back for more. When he wasn’t wrestling or lying around like some hounds like to do, we would let him run in our fenced back yard where he liked to retrieve anything you threw for him. The funniest sight was watching him run around jumping from one terrace down to another with a blaze orange soccer ball in his mouth.

Then, June 15, Walker for whatever reason, probably nature, jumped a vulnerable part of our fence when our backs were turned and ran away. We did not know which way to turn. We made up a few flyers, signs for posts and contacted the Humane Society. Then Anne from Dogs Finding Dogs contacted us. What a relief to know that there was someone out there that could and would track missing pets using dogs trained to follow scent trails. Over the next two weeks we spent time with Anne and Janel following the trained noses of Heidi and Lee each time that there was a Walker sighting. All of a sudden, sightings of Walker stopped coming in. Anne and Janel continued to work with us offering up the best advice under the circumstances.

On July 3, while placing more signs, expanding our search area, we received a call that Walker had been found. Tragically though, he was found lying between the North and Southbound rails of the Baltimore Light rail in Ruxton, roughly 15 miles from home and our search area. He had apparently been hit by one of the light rail trains a week prior to us receiving the call. We positively identified him and completed our goal of bringing him home on July 4,. While we are extremely saddened and heartbroken by the loss of our dear, funny, energetic and tenacious friend, we can thank Walker for being the catalyst to gaining two new friends, Anne and Janel and their faithful companions Heidi and Lee of Dogs Finding Dogs.

With much heartfelt thanks and gratitude for your help, advice and assistance during our time of need, 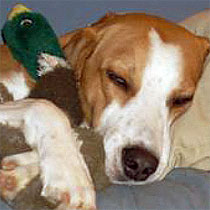