Winky is a very sweet, playful, & gentle 10 month old blue merle Shetland Sheepdog who was obtained from a breeder in Nevada. He had just completed a nine hour flight & was with us for half a day before seizing an opportune moment to escape from our home. A vigorous 10 hour search ensued without any success. Dog Finding Dogs was contacted the following day & Anne responded with helpful advice to canvas the area with reward posters, fliers & automated telephone messages to heighten awareness. She also told us how to preserve any scent articles for a search. Shortly there was one confirmed sighting of Wink. Janel and Lee came about three days after Winky went missing. Lee immediately went to work, honing in on Winky’s track near the confirmed siting. He followed Winky’s large circular path around yards and the adjoining woods. Janel had confidence that he was remaining stationary and that we should focus my efforts in the search area surrounding where he was last spotted. Based upon Janel’s advice, we established feeding stations and the next evening we spotted Winky again in a clearing. We continued to increasingly see him when replenishing the feeding stations, but we could not get within 20-25 feet of him without him running away. Janel determined that trapping would be necessary and continued to provide advice with how to set the trap. Winky was caught during the first night of trapping, & came through the six day ordeal with just a matted coat infested with ticks and brush stickers. Despite overwhelming odds against getting Winky back, Dogs Finding Dogs was instrumental in overcoming a less than 10% chance that Winky would be successfully returned to his new home. Anne & Janel provided far more than just an accurate dog search with Lee. Their expert, experienced-based consultation at each step of the search and rescue process to employ useful strategies enabled us to successfully locate and bring Winky back home. 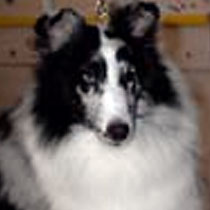