Zoey is our family Yorkie.   She ran out of the house on a Wednesday afternoon. We could not find her anywhere and we flooded half of the neighborhood with flyers. When we posted on Craigslist we were called by Anne of Dogs Finding Dogs and were told that their search dog Heidi could come out and try to locate Zoey. We called on the following Friday nite and she came over and tracked Zoey going in the opposite direction of where we put up flyers. We had none in that area. Zoey went along a long meadow behind some houses and then into the woods were we could see her footprints like she was being chased, then out of the woods to a house and then they stopped. We knocked on the door and they said they did not see Zoey. We searched some more and as we we got back home the people from the house called and said they had Zoey and they would meet us on the corner. They brought Zoey back but they had taken her tags and collar off and bought a new collar and leash for her. They were going to keep her! Their children coming home from school chased Zoey into the woods and then scooped her up! We want to thank Heidi for her work! We would have never found Zoey if Heidi didn’t lead us to the house where she was kept. Thank you Heidi! We love you! 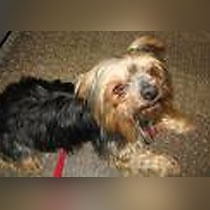